Technology has changed our lives dramatically. We, even the people from the past, can’t remember how life was without our smart gadgets.

Prensky used the term ‘Digital Natives’ and described this new generation and for him we were the digital immigrants. “Those of us who were not born into the digital world but have, at some later point in our lives, become fascinated by and adopted many or most aspects of the new technology are, and always will be compared to them, Digital Immigrants.” (Prensky, 2001)

I started using social media quite late. It was in 2009 with an introductory course to web 2.0 tools. Shortly after that I found myself on twitter, blogosphere and facebook. Meanwhile I was discovering new tools, which would add some spice to the tasks I assigned in the class.

However, there was a very important issue – being safe online. Before I introduced a tool to my students, I was trying to be careful to keep their identity safe. Moreover, my kids were growing up and they were asking my permission for a Facebook account. I was worried and I didn’t know what to do and how to guide them. It was then I had a chat with Joel Josephson at a conference in Istanbul and he told me it was not correct to keep the kids away from FB or similar social networking sites as they were the realities of their era. However; we, the parents, had to be a guide and tell them how to start as advised.

not to use their full names’

That was how the idea of this project emerged.

In September, when the schools started I told my headmaster that I wanted to organize a conference for the parents on e-safety. Then we gathered a project team of 11 teachers who volunteered to work. First we created posters and put them everywhere in the school and we announced that we needed students to work on this project because my idea was to make the students the presenters. 15 students arrived but we ended up with 12 very enthusiastic teenagers.

After our meetings, we decided to do it as a series of seminars

c)     for the parents and the students of the high school

We also decided to talk about the followings

1)    Defining the net generation and the digital era

3)    Advantages and disadvantages of games

4)    Dangers waiting for the kids and teenagers on the net 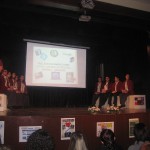 We did surveys, we read articles, we even talk to psychologists on addictions, we created animations, videos, brochures, a conference blog, event on facebook J , we used facebook videos and told the parents “You never let your children walk in the street alone until s/he is ready to protect himself/herself but you leave them in front of the screens with total strangers. Instead of opening your doors to the unknown dangers, hold your kids’ hands in the early years of internet surfing. Teach them how to stay safe online.” 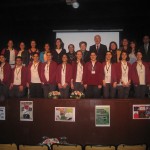 I think we managed to raise awareness among some parents.

My students will also present at a symposium at a very well-known state university in Istanbul (ITU). The symposium is organized by the guidance counseling team of the university. 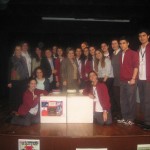 celebrating after the presentation

e-safety
2 comments on “Surfing Safe on the Net”