“Let us go singing as far as we go: the road will be less tedious.” 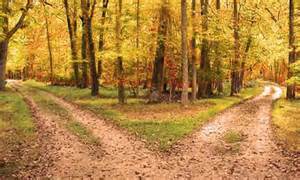 I have a group of mixed-ability students in grade 11 studying mostly languages. Some of them are not happy because that was not what they actually wanted but that was the only option to take.

I had a very disappointing lesson the other day and when I arrived home I thought what I could do for them to realize or do something for themselves until the next fork appears on the road they had chosen. And I decided to go to the class with a poem. Yes, I chose The Road Not Taken by Robert Frost as I thought with a little help, they would be able to understand the poem and we’d be able to talk about our decisions. To sum up, it was a great lesson. We all enjoyed it and I think they also revised their decisions or their attitudes towards their choices.

Now I’d like to tell you how I planned the lesson. First of all I found some very valuable lesson ideas on the poem and took some inspiration from them and I prepared one suitable for my students.

First I asked what the word ‘road’ meant. Then I asked what it could be used as a metaphor. We looked at the picture I chose as a warm up. ( If you search Google/Yahoo images as “Two Roads”, you’ll get some pictures of the woods that come to a fork)

Then we brainstormed words/ideas related with roads. I chose a recording of the poem on YouTube and told students to listen and jot down any words or phrases they heard/caught/liked.

After listening to the poem twice, I gave them the handouts and told them to read the poem and find if the words they had heard were really in the poem. Then we discussed the poem. We talked about if the poet was happy with his choice, if the poem was sad or happy or hopeful. Now I’m waiting for their bookmarks on the poem. They’ll use the ideas from here.